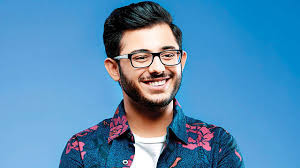 1.  His is born on 12 June 1999 in Faridabad Haryana.
2. His real name  is Ajey Nagar but he is famous by name Carry Minati.
3. He is not more interested in study so he made his first YouTube channel at the age of 10 years.
4. He made his second YouTube channel by the name Addicted A1 in 2014. On this channel, he uploaded video game preview and funny mimicry of Sunny Deol and Rhitik Roshan.
5. He changed his channel name from  Addicted A1 to Carry Deol.
6. He became famous when he hosted Bhuvan Bam who is establisher of channel BB ki Vines.
7. Last time he changed his channel name from Carry Deol to Carry  Minati and now he has 17 million subscriber on this channel.
8. He has now one other channel which name is Carry’s live.On this channel he uploaded only gaming videos and have 4.8 million subscriber.
9. Nowadays, he came in headlines because he uploaded a video on his channel and that video broken many records and became more popular on YouTube.
10. His recently posted video”Tik Tok Vs YouTube” achieve 1 million likes in only 1 hour and break the record of  ‘Filhall’ song which achieve 6.6 million likes and now his video achieved 8.5 million likes.